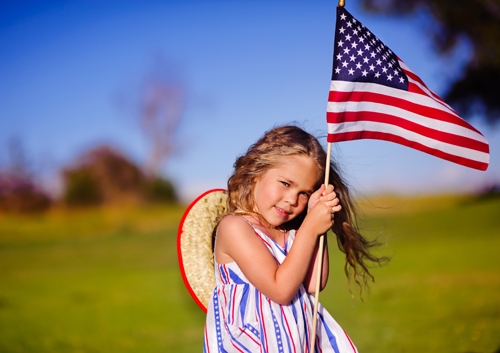 Every year, Americans all over the world celebrate the birth of the country and its independence on the Fourth of July. There are countless ways that people celebrate and they range from community parades and large scale gatherings to concerts, fireworks displays, and smaller scale celebrations among family and friends. For some people, July 4th is synonymous with baseball, while for others it is all about the beach of barbecues. However you celebrate, you can be sure that red, white, and blue is visible everywhere throughout the area.

The Beginnings of Fourth of July Celebrations

Although it wasn’t officially designated as a federal holiday until 1941, the actual tradition of celebrating Independence Day goes back to the time of the American Revolution (1775 – 1783). At the time of the American Revolution, representatives from the 13 colonies penned the resolution that ultimately declared their independence from Great Britain. The continental congress voted to adopt the Declaration of Independence on July 2nd of 1776. Two days later, Thomas Jefferson’s famous document that is now known as the Declaration of Independence, was adopted by delegates representing the 13 colonies.

First States to Recognize the Fourth of July

Fun Facts About the Fourth of July

For many, the tradition is something entirely different. Along the coastal areas of the United States, people may haul out huge pots to have lobster or other types of seafood boils. Others may spend the day in the bleachers at a baseball game, or at a park, cooking a great traditional meal over an open fire. No matter how or where you celebrate, one thing is certain: all Americans celebrate July 4th as the birth and independence of our country.

Samuel Burt
I’ve been visiting the office for the last 3 years and had braces for 2 years. They supported me up until jaw surgery and after...

C.B Martin
The staff is always courteous and so kind. We've never had to wait more than 5 mins to been seen. I’ve had the best experiences,...

Angelina Kendrick
Highly recommend everything from this orthodontist! My experience with Invisalign as a college student has been exactly what I had hoped for. The doctors and...

Edna
Great Orthondontist team! Two years of treatment went by fast and my smile is better than ever. They are really kind and answered all of...